Note: ​Table of contents is clickable ​

2) What you need to know about Mind Body Spirit medicine

​Some Important Things to Know about Mind Body Spirit Medicine:

My practice explores the mind, body, and spirit of the patient with curiosity and openness.  More and more patients are craving a type of medicine that explores all aspects of who they are with a health professional that has the willingness to hold space for these investigations and actively participates in the uncovering and discovering of themselves.
Patients want not only to be listened to but to be heard. They want the healthcare team that is treating them to truly care how they are feeling and what is happening in their lives. This not only makes it easier to talk about vulnerable feelings or difficult symptoms, it can help put the holistic picture in perspective for both the patient and healthcare team.

It’s important to note that if you are receiving Mind Body Spirit care with Butterfly Naturopathic, patients will not be expected to do all the categories at once. As a patient you can dive into something like emotional work when you are ready and if you have appropriate rapport with your medical professional. Nobody is forced to do this work and each person will have a unique pace that works for them.

What you need to know about Mind Body Spirit medicine 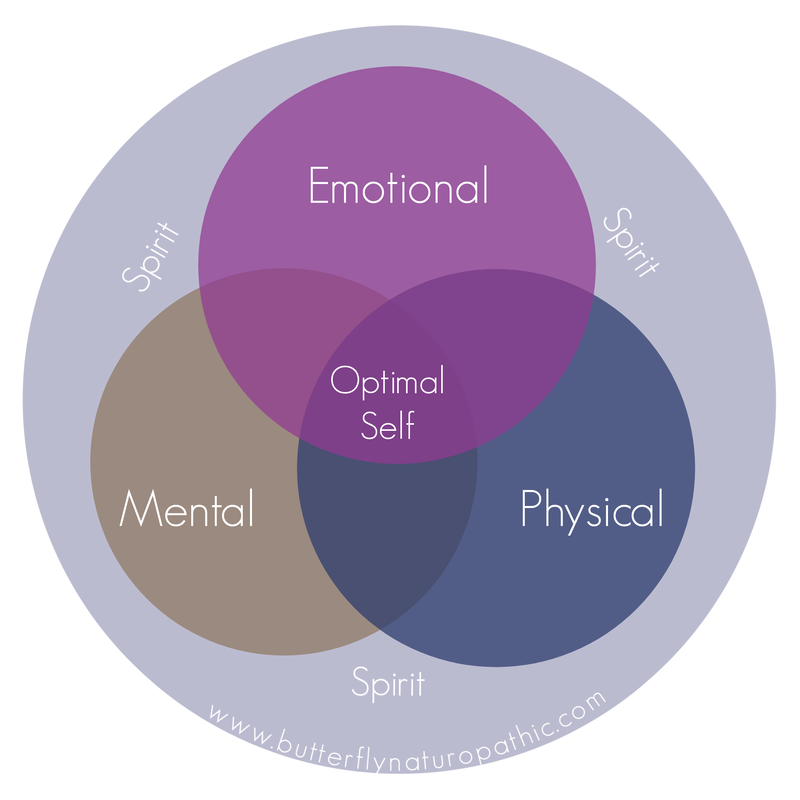 What is the “Mind” part of the Mind, Body, and Spirit model? Mind is considered to hold both emotions and mental processes.
​Let’s break Mind down into two categories:
anchor: mentalmbs
anchor: bodymbs

This is often the part of Mind Body Spirit that most people are familiar with. Your body is referring to your physical body.
anchor: bodysoi
anchor: spiritmbs

The spirit part of Mind Body Spirit is something that you believe in or experience that is bigger than yourself. Spirituality can’t be defined in one way for everyone because spirit is what you define it as, it is different for each person. This could be something like believing in a particular religion which is what many people often equate it too, or something as simple as celebrating the vast beauty of nature, or creativity, or community. Spirituality by our definition is something you feel in awe of when you think of it. Thinking of what makes you feel a sense of awe and possibly wonder or curiosity is a good place to start if you are unsure of what spirituality means to you. Also you do not need to have spirituality all figured out ahead of time, this is something that can be further explored as part of your unique process.
anchor: spiritsoi
anchor: mbsinvitationtoexplorewholeself
anchor: mbssameway
anchor: mbsinterconnectedness
anchor: hnpofmbsmedicine

The Departure of Looking at Health Holistically

Why does North American culture seem to be obsessed with pulling apart the holistic system and treating everything as a separate entity when everything is truly connected?

Humans have always had a holistic approach to medicine until quite recently in time. Initially, dissecting and learning from the human body was likely human curiosity. Then as humans evolve it was likely to further our research about how the body works, but how come they decided to continue to look at and treat parts of the human rather than the whole?

One step further was to take the mental/emotional component and to separate the spirituality from study of the mind. Not everyone has the same spirituality, religion or belief systems, so in a sense separating spirituality from medicine made sense at the time. That separation of spiritually all together was an overcorrection of sorts, and now we seem to be realizing there is a balanced approach that considers each person’s unique spiritual beliefs.

Obviously, there are both challenges and benefits to dissecting the physical human body and then separately researching the mind. As a result of our curiosity and scientific study, we have made many discoveries that have advanced medicine. Scientists do their best to create an environment where they can understand and control the variables. Sometimes isolation is mostly possible, and sometimes research variability is unable to be controlled because there are things we don’t understand are interconnected and unable to be isolated in this way.  Sometimes we need to separate everything and start to learn in compartments to tackle large and difficult to understand systems. On the other hand, it seems that when a system of a human is not viewed as a whole at some point, it is more likely that the person being treated starts feeling like their symptoms are a game of whack-a-mole that doesn't get to the root of the issue. In some cases, we are starting to see research that is looking at the human as an interconnected entity which is fascinating.

There are both challenges and benefits to adopting ancient systems of health and medicine as well. Regardless of the culture, ancient healers often developed systems to help their communities survive or thrive. They would then share information with neighboring communities or cultures. These systems are often complex, effective, and rich with entire cultural systems of information. When you take one part of the system out, it doesn't quite have the same effect on health as it would have in those ancient times. These systems have been used effectively, in some cases, for centuries or even longer. Much of the ancient wisdom is recorded as anecdotal, sometimes this is in written form and sometimes spoken. This is also a valid way of collecting information. Although like research based medicine, not everything about an ancient and wise system should be adopted without question. There have been some treatments from ancient systems that are now outdated, for instance, we wouldn’t use mercury to treat humans anymore. We know mercury is toxic now because of research.

What if we thought that old ways of seeing health were not useful anymore but they contained keys to unlocking health solutions of the future? It looks like we truly need a balance of the wisdom of both current researched medical discoveries and ancient systems of health and wellness.

Regardless of how researchers or ancient healers discover medicinal information, their goal is often similar. Like the ancient healers that shared wisdom, studying the body scientifically allows us in either case to get information and share it with others.

So then how do we safely blend together what we know from the most current medical science with the ancient wisdom that has been passed down for thousands of years? That is where the Naturopathic medicine model is pivotal for holistic medicine. In North America, there are Naturopathic degrees that train future Drs in a wide range of current and ancient medicine philosophies and methods. They study the interactions of treatments and safety or efficacy of a wide spectrum of treatments and health models. There is at least one common factor to all of these naturopathic educational institutions, they promote medicine that considers the whole human.
anchor: researchandmbsmedicine

Some Important Things To Know...

How We Can Help

Some Important Things To Know...

#7 - Answering the call to explore the whole self is an ongoing journey. Everyone will have a different need and approach and it’s the job of the doctor to meet their patient wherever they are at.